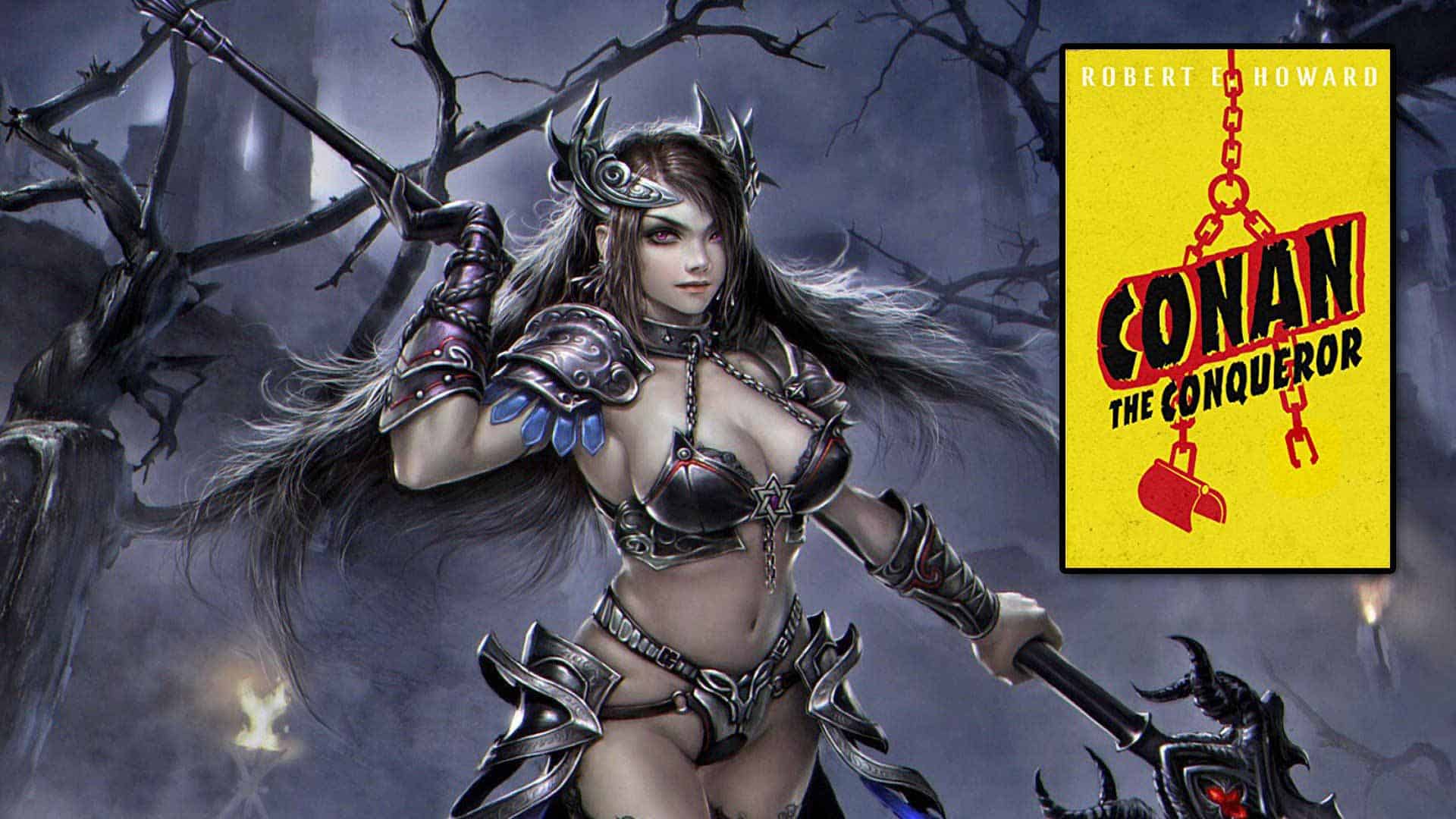 A classic fantasy novel that inspired many tabletop RPG campaigns and should be considered near the top of Best RPG Books – at least in the fantasy fiction section. Overall, the book is a brutally honest look at what it may have been like in pre-history. Conan is a man of legend, and this novel is a great start to his adventures. While it was published first, it’s not the first book chronologically in the Conan canon of writing, but that doesn’t take away from it’s positives.

Conan the Conqueror is one of the earliest fantasy novels written that eventually helped shaped the world of early Dungeons & Dragons and many other RPG systems. I’m going to take a look at this fantasy classic and show how it belongs among the best RPG books of all time.

First off, please forget the movies. Yes, the first one was great. And the second one was okay. The reboot was kinda garbage compared to the first, though, and I don’t want to get too far off track in this article. Because of this, let’s move on and dive into Robert E. Howard’s classic.

What’s in a Name?

Conan the Conqueror is also known as The Hour of the Dragon. Published in 1950 by Gnome Press, it was revolutionary for its time. The fact that it stands the test of time and is well read even today is testament to Howard’s writing prowess.

Originally, it was published in serial form in the December 1935 through April 1936 issues of Weird Tales. When it became popular, it was later republished as a novel that was also a hit because of its brutal realism and sense of adventure.

The Conan the Conqueror fantasy novel has over 4,000 reviews at Good Reads (which is owned by Amazon.) Here’s their description of this masterpiece.

Of the 21 Conan the Barbarian tales that Robert E. Howard (1906-1936) completed in his all-too-brief lifetime, Hour of the Dragon was the only novel-length story. It may also be the very best of the series, crafted when the legendary pulp writer was working at the height of his powers. Conan is a huge swordsman fighting both natural and supernatural foes in a time-lost world known as the Hyborian Age. At this point in his bloody career, Conan is the middle-aged king of the ancient kingdom of Aquilonia. He must fight one final battle to save the known world from a resurrected sorcerer named Xaltotun. Only the fabled Heart of Ahriman can destroy Xaltotun, and Conan must embark on an epic quest to retrieve the Heart. Howard hammered out every word as if he had actually lived through it himself, and in doing so forged a crimson masterpiece of heroic fantasy. (This novel has also been published as part of the formal Conan series as Conan the Conqueror.)

Let’s take a look at some of the better reviews.

The only Conan novel written by Howard, The Hour of the Dragon delivers everything a fan of the Cimmerian would want – beautiful women needing rescue, several evil wizards to defeat, and a well-paced adventure that has Conan striving to recover the Aquilonian throne and thwart the efforts of Xaltotun to restore the empire of Acheron. This is the umpteenth time I’ve read the novel since acquiring this Sci-Fi Book Club edition almost 30 years ago and it’s still great fun.

I like to believe the following reflects a certain emotional maturation on my part but at this point in my life I can’t help but wish some author would write a Conan novel (or short) from his victims’ point of view. After all, all of our “knowledge” about Conan comes from him. Reflect – the kozaki and Zuagir didn’t just ride around waving swords and yelling. They descended on defenseless villages, killing men, raping women and leading off captives to be sold as slaves. And Conan led them. And just how “willing” were all those women who shared his bedrolls?

Maybe that’s why all my favorite Conan stories nowadays either have a strong female foil (“Red Nails”), no female at all (“Beyond the Black River”) or Conan doesn’t get the girl (“People of the Black Circle” or “A Witch Shall Be Born”).

Not the greatest review, but it’s one man’s opinion. Again, this novel has over 4,000 reviews on Amazon. Let’s take a look at another

“It is not alone the rebellious lords of Aquilonia and the armies of Nemedia which are arrayed against you,” answered Hadrathus. “It is sorcery – grisly black magic from the grim youth of the world. An awful shape has risen out of the shades of the Past, and none can stand before it.”

This is one of the best of Howard’s Conan tales. Its rich description and compelling pace took me into a re-imagined Eastern Hemisphere of the past with warring empires and fantastic cities. Conan, a barbarian who has clawed his way to becoming King of Aquilonia, is about to suffer his worst defeat. Within a few pages of the start of this novel his realm is defeated and he is quietly caged and taken to a foreign land. Howard’s longest written piece is full of the language and prejudices that characterized pulp fiction of a hundred years ago. If you can set that aside, there is an adventure that few authors have matched and many of subsequent generations have tried to copy.

Here’s a couple reviews of Conan the Conqueror at Amazon.

This was purported to be Howard’s only real Conan Novel, and it is, in my opinion, one of the best Sword and Sorcery novels ever. Conan is King, and conspirators resurrect an ancient sorcerer to depose the King. The sorcerer has plans of his own, to ressurect the ancient Kingdom of Archeron. Conan must find the ancient magic that will give him control over this sorcerer. At the same time he finds his future queen. The battle scenes in this novel are what made it special to me, the combined arms combat of pikes, archers and heavy horse showed Howard’s knowledge of medieval warfare. A great read, but should only be pursued after the other books in the series are read.

And another good review of Conan the Conqueror

My all time favorite “sword and sorcery” novel. I first encountered Conan (and Robert E. Howard) when thirteen on a cold and stormy summer night. I was thrilled and fascinated. During my teen-age years I went on to purchase and read all of the Conan stories. Now, sixty plus years later, I find Conan (and Howard) to be good and relaxing reads. While young I read all of Edgar R. Burroughs’ and many of A. E. Merritt’s fantasy-adventure works. These do not stand up to the test of time. Howard’s works (and Conan’s adventures) still are good and relaxing tales. I strongly suggest that “sword and sorcery” fans of all ages indulge themselves with Howard’s tales. Most are available from Amazon. By the way, I am a retired PhD professor, I was a youthful “nerd”. At all stages of my life Conan and Howard have been reliable companions.