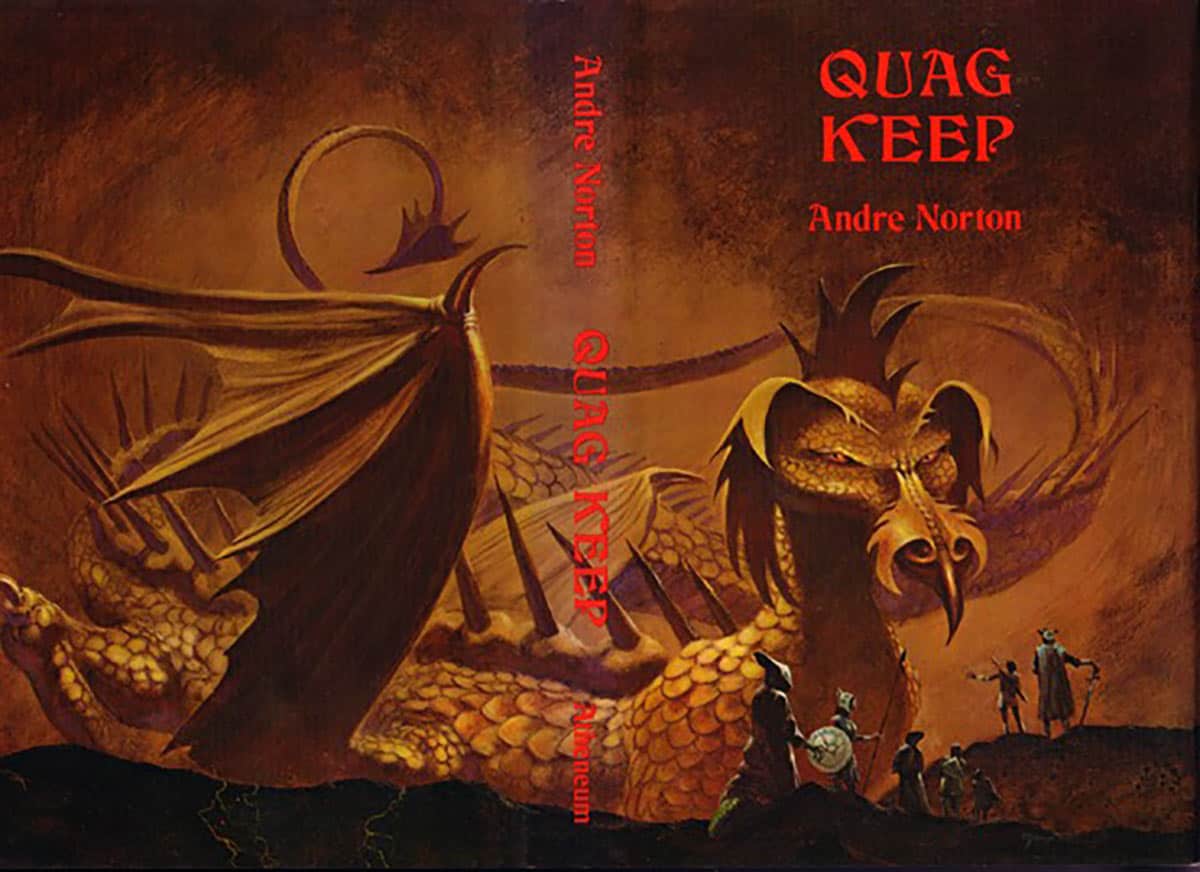 Summer is upon us once again. If you’re looking for something great to read this summer, and you’re interested in Dungeons and Dragons, keep reading. I’ve put together a short list of the 10 best D&D novels for summer reading this year. There’s sure to be something on this list that catches your eye. If not, browse the site and see if one of our other articles on D&D books fills your appetite. Okay, let’s go!

This is the very first D&D novel in my eyes. While the system used in the book isn’t D&D proper, Norton called up Gary Gygax to come over and play a few rounds of D&D to give her some research on tabletop gaming back in the 1970s. Here’s a review from Amazon.

It’s remarkable how much is different in this novel from where the game evolved and how future novels about dungeons and dragons would depict the world. And here in the first book the characters and the players feature in the book. It isn’t a great book but it is a remarkable one that shows an alternate take on Dungeons and Dragons lore that could have been. And in many ways the world and characters depicted seem compelling and suggestive of directions to take your own games.

There is a sequel which I’m going to also read though it was written many years later.

And here’s the blurb:

Once, they were role-playing gamers in our world. They came from different places and different backgrounds. Now they’re summoned together by some magical force…to a land that mirrors the games they used to play. Can they band together to unlock the secret of their summoning–and rescue from the legendary Quag Keep the person who may be able to return them home?

This is another D&D novel that doesn’t specifically deal with Dungeons and Dragons. However, it’s the start of a fabulous series. Be warned that the first book gets dark really quick when the heroes are transported to the game world by their Dungeon Master. However, it’s a great fantasy story. The first four books are great, but the quality declines a little later in the series. However, it’s still a great book to pick up.

I read this some 35 years ago. I decided to look for it again after running out of books. Sometimes the book seems different when you read again. Not this one, it still feels relevant and new. Fantastic book. Well written, great action, humor and story progression. Excellent!

By Margaret Weiss and Tracy Hickman

This is the first book of the Dragonlance Chronicles series and should be required reading for all D&D fans. Seriously, this series of novels really shook things up when they first came out. There’s still interest in them decades later, and I’ve heard that new Dragonlance novels are coming. The books take place in a world called Krynn and is full of all sorts of fun and adventure.

I purchased the first edition when I was ten years old (yep time flies from the 80s). The cover of the book immediately captured my attention. Having finished the Lord of the Rings, I was looking for something new. Before I knew it, I was hooked and purchased every single Dragonlance book across multiple series. I have just purchased this again as a Xmas gift for my 10 year old son, who does not like Harry Potter or the other young adult fantasy books because having read the LOTR he finds them too childish, which is understandable.

The additional Dragonlance series books are hit or miss as is expected when you over expand a series, but you will be happily rewarded with the first six novels. I found myself invested in not only the main characters but also wanting to know so much more about the backgrounds of the less characters also. Can’t speak highly enough about this series.

You probably know Salvatore because of Drizzt the dark elf, but Canticle is the first of a five book series (a quintet) about a totally new character. If you’re looking for a break from traditional action fantasy, this series of books will leave you satisfied. When a curse is unleashed, Cadderly must set aside his pursuit of knowledge to lead a motley team of monks, dwarves, and druids—and one alluring young warrior monk named Danica—into the catacombs of the library and a fight against evil. There, the friends must join together as a group of unlikely heroes to save their home from the destruction already pulsing through its walls.

Ok, I read this one because like most people, I’m a Drizzt fan, but also I just love Salvatore’s writing. So being a completionist I wanted to read the Cleric Quintet series.

What a treat this was! It had Salvatore’s usual easy-reading, thrilling, fast-paced style, but told a story that was so very different from his Drizzt stuff. Instead of being about the brooding, anguished Drizzt, it’s about the good-natured cleric Cadderly, who is genuinely in love with Danica, a monk. Instead of the characters being off gallivanting around the countryside, the action all takes place at the Edificant Library, a home for priests and scholars of all types in the Snowflake Mountains. The action gets deeper and deeper into the library, until we’re brought into the very bowels of it. Great stuff and a wonderful change of pace.

The main characters here (Cadderly and Danica) are fleshed out just enough to make you care about them. I can’t wait to find out more about them in later novels of this series. And side-characters are introduced that provide some welcome comic relief. The villains are believable and the monsters are menacing.

You won’t regret reading this one! I can’t wait to read the next now…

The first book in the Prism Pentad, this series of five books takes place in the Dark Sun universe. This is an older D&D universe that it’s around anymore, but it’s a harsh, desert world that really puts D&D in a new light. For thousands of years, the devil sorcerer King Kalak has used vile magic to drain Athas of its precious life-force. Now, his reign is coming to an end—though the city of Tyr, like the rest of the world, is nothing more than a magic-blasted ruin and a desolate place of dust, blood, and fear. All that’s left is desperation—and revolution.

The Verdant Passage, by Troy Denning, pulls us into a fantasy setting, where the world has been damaged by the heavy use of magic, where metal is rare and where slavery is the norm. The King Tyr, plotting to become a dragon, must be stopped at all costs. So it is up to a slaveholding noble, a half-slave magic using girl and a man-dwarf gladiator to start the revolution. This may not seem that interesting, but the blend of cultures, from the greedy elves to the hairless dwarves, from the great ziggurat to the desolate sand wastes, really hooked me. The author does everything to bring out a different flavor to the setting. He refuses to give us the same old same old. I suggest at LEAST picking up the first book to check it out. I was first exposed to the Dark Sun books when I got the third book in this series and totally enjoyed it.