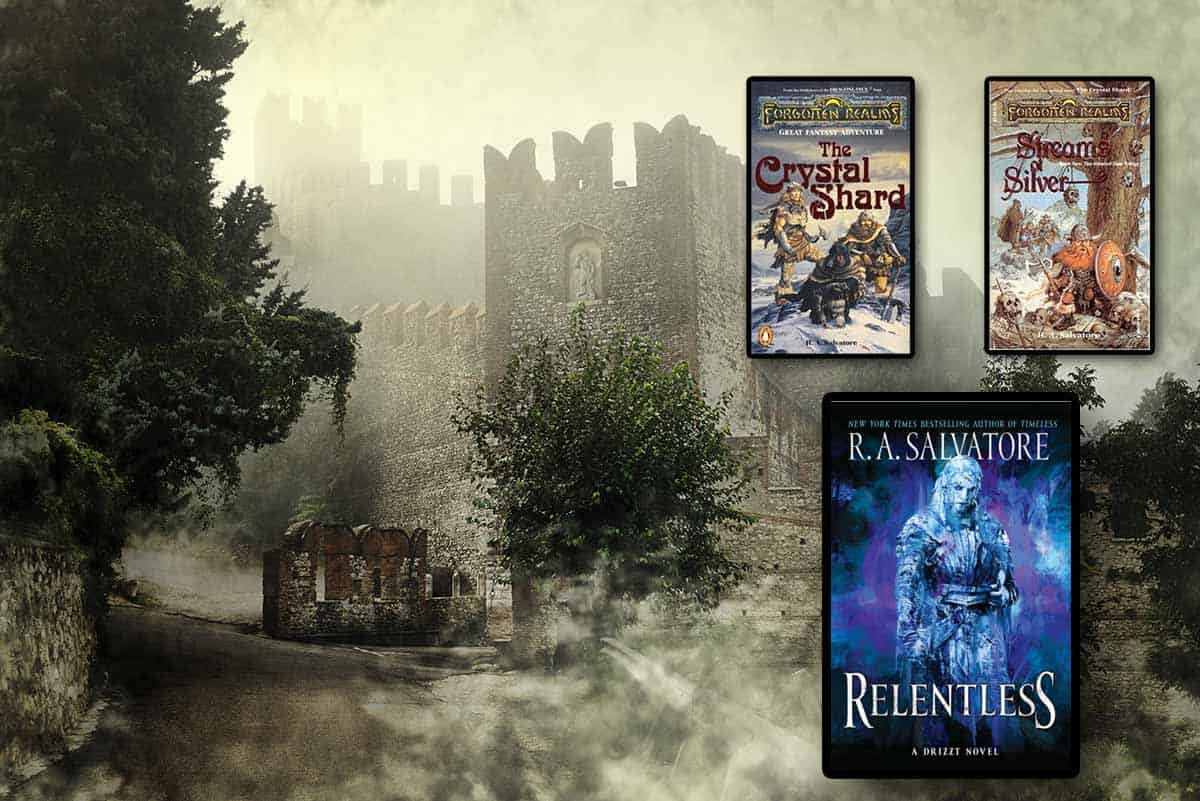 I’ve put together a list of the 8 best D&D novels and fantasy series – in NO PARTICULAR ORDER. Thank you for reading.

This is, of course, a classic set of D&D novels that any fan of Dungeons & Dragons should read at least once. As a well loved D&D fantasy series, there’s a lot more books than this trilogy, but these three books hold a special place in the hearts of many. Authors Tracy Hickman and Margaret Weis are highly talented and were able to work together to create a rich fantasy world.

While RA Salvatore is well known for the Drizzt books, the Cleric Quinted (a set of five books) is truly a great series. The books follow Cadderly Bonaduce, a scholar-cleric, as he attempts to stop the “Chaos Curse.” Yes, it sounds like typical pulp fiction, but Salvatore manages to rise above and really focus on the character of Cadderly who is not as all-powerful as Drizzt.

There’s still a lot of fantasy adventure in the series, so don’t think you’re going to be bored or anything. Published from October 1991 to June 1994, they are currently owned and published by Wizards of the Coast (which is owned by Hasbro!) All that aside, these are some of the best official D&D novels of all time. Check them out if you have some time and want to dive into a rich fantasy world.

The Heroes of Phlan trilogy

These books were video games too! Cool, right? When you combine D&D novels and D&D video games, you sometimes get something really good. The games were old (back when graphics weren’t very good), but the books are even better. In fact, I would say that these are some of the first D&D novels you should read if you’re getting into the world of Dungeons & Dragons fiction for the first time.

They’re not my VERY favorite D&D novels, but they’re on my top 10 list for sure. The books follow the adventures of Shal Bal, Ren o’ the Blade, Tarl Desanea, and their various descendants as they investigate the mystical pools that plague the Moonsea region. Overall, this is a fantastic set of three books. There’s three authors, but the series still manages to come together as a cohesive whole.

Spelljammer: Beyond The Moons

Spelljammer! Some of you might not be familiar with this setting for D&D that included huge spaceships and alien creatures and wormholes and all sorts of other goodness. This novel is one of the few written in the D&D setting. As far as D&D novels go, it’s on my list of top 10 for sure. Written by David Cook, the book is a classic D&D novel from the early 90s. It was published in 1991, when D&D was getting really weird.

The novel is about Teldin Moore, a farmer on the planet Krynn. His life is changed completely when a spelljamming ship crashes onto his farm and destroys it. From there… well, I hope you can imagine the fun. Yes, he’s from Krynn, the world of Dragonlance. That’s not the best thing about this novel, though. I don’t want to spoil it for you, but you should really go check it out at least once. If the first chapter doesn’t hook you, you can give up.

Gary Gygax had an earlier (Greyhawk Adventures) that featured Gord the Rogue, but number two in the official Gord the Rogue series is one of the best in my opinion. It’s got everything you love about D&D and great fantasy fiction. Gord is a complex character who came from nothing and worked his way up to become a very important person in the world of Greyhawk, one of the original D&D settings.

The final Gord the Rogue book published by Gary Gygax in 1988 is another favorite. Maybe it’s because I was a teen when it came out, and I had been following the character and series through the various D&D novels over the years. Whatever the reason, this book left an impression and has made my top 10 list of best D&D books of all time.

In this book, Gord and his companions enter a magical world ruled by the evil monster Tharizdun, who was responsible for the deaths of Gord’s parents. It’s your basic fantasy story, sure, but if you’ve read the other books leading up to it, the payoff is spectacular on many different levels. No, it’s not THE best D&D novel of all time, and I’m probably being sentimental, but dammit, Gord the Rogue belongs on this list – twice! (Small smile.)

Part of the Dragonlance Villains series, Lord Toede is not well known, but it should be. Written by Jeff Grub and illustrated by Jeff Easley, this is a classic D&D novel that pulls no punches. Here’s the blurb: “Fewmaster Toede, a vain, pompous, and unreliable slavemaster and Dragon Highlord, becomes an unwitting hero as he walks a narrow and perilous path among competing evil forces that would make him their pawn…”

This is a great read that really goes a long way in fleshing out Krynn, the world of Dragonlance. If you’re tired of reading about heroes and want to experience the villain’s perspective for a few novels, this is a good way to dive in. If you enjoy, you’ll want to check out the rest of the novels in the Dragonlance Villains series. Regardless, you’ll want to give Lord Toede a try.

I recently had finished the War of the Spider Queen series. That series was terrible (see my scathing review of the last book). It left me annoyed and unsatisfied, so I set out to find a different sort of fantasy book. This one fit the bill.

Unlike the typical Dragonlance or Forgotten Realms book, this book progresses in multiple acts and has numerous interesting and often funny twists. The book gets particularly funny in the last few chapters.

I’ve read about authors who boast that they don’t know how a book is going to end until they finish writing it. I personally find that sort of writing to be pathetic at best. Lord Toede isn’t like that at all. This book is a wonderfully intricate lattice of events and characters. I really wish there was an audiobook version of this book.

In short, it was a very refreshing change of pace. I’m actually worried about what I’m going to read next. This is a tough act to follow.

Elminster: The Making of a Mage

Written by Ed Greenwood, Elminster: The Making of a Mage is a wonderful novel that really digs deep and shows Elminster, one of the most powerful characters in the Forgotten Realms. The blurb sets it all up. “It is the time before Myth Drannor, when the Heartlands are home to barbarians, and wicked dragons rule the skies. In these ancient days, Elminster is but a shepherd boy, dreaming of adventure and heroics. When a dragon-riding magelord sweeps down upon him, though, the boy is thrust into a world of harsh realities, corrupt rulers and evil sorcerers.”

The reason I personally included this novel in my list is that I really enjoy Elminster as a character. Yes, he’s sort of the Gandalf of Dungeons & Dragons, but that’s what’s so cool about him. He was my generation’s Gandalf in some ways. No, he isn’t a perfect character, but he had an impact on me and showed what responsibilities came with great power. Overall, the book is well received and considered by many others to be one of the best D&D novels of all time.