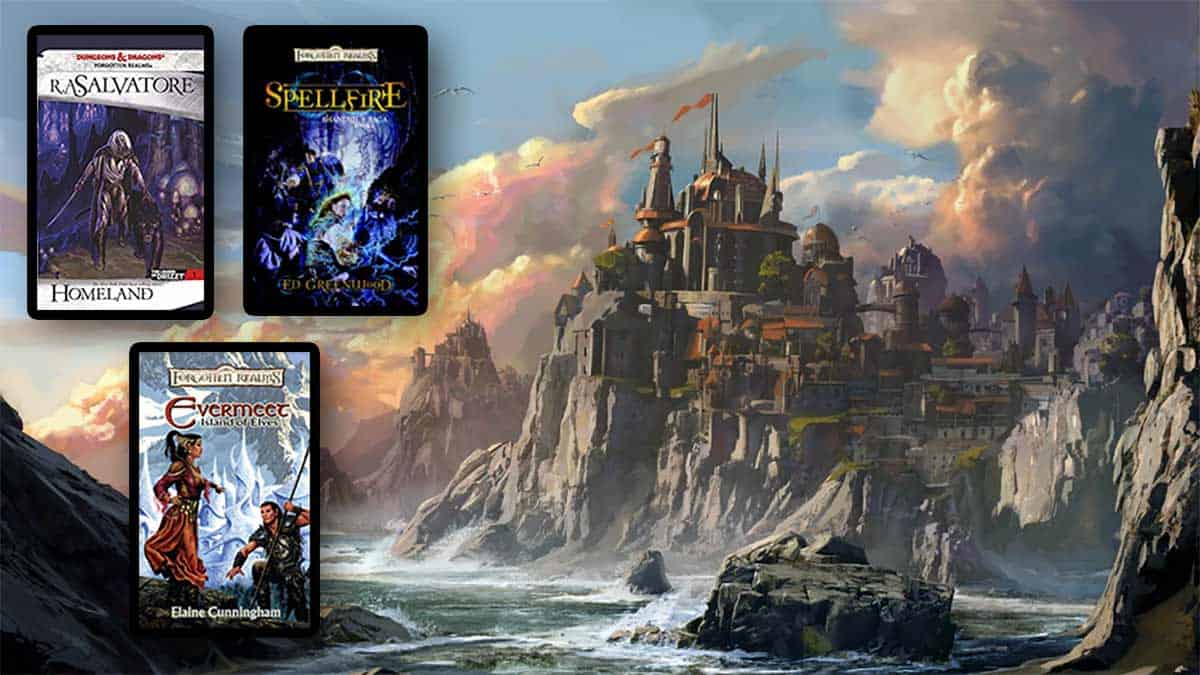 I’ve got a list of eight great Forgotten Realms novels you’re going to love reading. If you’re a regular fantasy fan, a LitRPG fan, or just love D&D novels, you’ve come to the right place. Sit back and see if you agree with my selection of books that best represent the Forgotten Realms universe. Let’s go!

Homeland is the first book in the Dark Elf Trilogy and the Legend of Drizzt series which makes it a great place to start your adventure in the Forgotten Realms. This might not be Salvatore’s favorite book, but I think it’s a classic and will be enjoyed by thousands in the years to come. Here’s a quick rundown on the story in this Forgotten Realms novel.

As the third son of Mother Malice and weaponmaster Zaknafein, Drizzt Do’Urden is meant to be sacrificed to Lolth, the evil Spider Queen, per drow tradition. But with the unexpected death of his older brother, young Drizzt is spared—and, as a result, further ostracized by his family.

As Drizzt grows older, developing his swordsmanship skills and studying at the Academy, he begins to realize that his idea of good and evil does not match up with those of his fellow drow. Can Drizzt stay true to himself in a such an unforgiving, unprincipled world?

Spellfire is the first book in the Shandril’s Saga series by Ed Greenwood, another legendary RPG author. A resident of Ontario, ED GREENWOOD created the Forgotten Realms setting nearly 30 years ago and has written hundreds of novels, articles, and game products in the setting.

Shandril of Highmoon is an orphaned scullery maid who dreams of a life of adventure and excitement far from the drudgery of her daily tasks. On a whim, she runs away to seek adventure, unknowingly setting a course for the grotto of the most feared creature in the Realms.

The dracolich is shrouded in unspeakable evil that can be defeated only by a power equally as strong. Thanks to enchantments created by the great mage Elminster, the only magic strong enough to triumph must be channeled through Shandril’s own body.

With the enormous burden of saving the Realms now on her shoulders, Shandril finds the adventure she sought—as well as death, terror, and love.

Yes, this is the third book in the Avatar series, and yes, another author wrote the first two novels. However, if you enjoy Waterdeep, you might want to dip your toes into the city (and the Forgotten Realms) with this novel. It’s a great way to experience the joys of this D&D universe with a heck of a story from one of the best D&D authors of all time. Yes, Salvatore is famous, but Denning tells a damn good story.

After their adventures in Tantras, Midnight and her allies are tasked with returning the Tablets of Fate—mysterious and ancient artifacts on which the responsibilities of the gods are recorded—to the god Ao.

However, their quest is more complicated than it appears. The evil gods Myrkul and Bhaal also seek the Tablets, hoping to twist them to their own dark ends. And they aren’t the only ones with a selfish hidden agenda.

Hungry for power, the deity Cyric is on a similar mission—one that further imperils the very existence of Faerûn itself. Though Cyric was once Midnight’s trusted friend, their history cannot save her from his ruthless ambition . . .

The destiny of the world will soon be decided and a new pantheon of gods will rise into the heavens.

Evermeet: Island of the Elves

At the heart of its story is Amlaruil, Queen of All Elves. When Evermeet comes under massive, devastating attack, her sacrifice holds the last hope of saving the elven homeland from the evils of the Beast Lord Malar.

The Crystal Shard is first book in the Icewind Dale Trilogy and the fourth book in the Legend of Drizzt series and another great introduction to the Forgotten Realms setting. If you’re looking for an old school D&D novel, this is the one you should read. Trust me. You can thank me later!

With his days in the Underdark far behind him, drow ranger Drizzt Do’Urden sets down roots in the windswept Ten-Towns of Icewind Dale. A cold and unforgiving place, Ten-Towns sits on the brink of a catastrophic war, threatened by the barbarian tribes of the north.

It’s in the midst of battle that a young barbarian named Wulfgar is captured and made the ward of Bruenor, a grizzled dwarf leader and a companion to Drizzt. With Drizzt’s help, Wulfgar will grow from a feral child to a man with the heart of a dwarf, the instincts of a savage, and the soul of a hero.

But it will take even more than that to defeat the corrupt wizard who wields the demonic power of Crenshininbon—the fabled Crystal Shard.

A Forgotten Realms mystery novel? Yes! And there’s more than one! This one is set in Cormry obviously, but it’s a rousing mystery tale set in your favorite D&D setting.

Tired of the political machinations of his egotistical fellow wizards, Benelaius retires from the College of War Wizards to take up residency in Cormyr, where he lives peacefully.

That is, until he and his legman, Jasper, are forced to investigate the murder of a messenger from King Azoun.